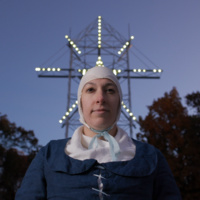 Invited to create a new body of work as Lehigh University’s Horger Artist-in-Residence (2021-22) in the Department of Art, Architecture, and Design, Attie has created an artwork which interrogates Bethlehem's past and present as a microcosm of America.

From the city’s founding as “The Bethlehem of North America” by Moravian Christian fundamentalist and utopian settlers in 1741, to its later industrial heyday form the late 19th to 20th centuries as the capital of the American steel industry, only to then be followed by that very industry’s collapse; and finally from the post industrial economic devastation which ensued to the city’s partial economic reincarnation in the form of the Sands, and then later Wind Creek, Casino built on the very grounds of the former Bethlehem Steel Corporation, Bethlehem is a microcosm of America.

Attie’s project investigates this distinctly American brew of religious utopian fervor, industrial capitalism’s rise and fall, and finally its reinvention in catering to the hopes and dreams of making it big on the part of casino goers.

The completed artwork is a hybrid video and sculptural installation which complicates and conflates Bethlehem’s serpentine layers. The piece is comprised of a central sculptural element centered in between two channels of synchronized video.

Shimon Attie is an internationally renowned visual artist whose practice includes creating site-specific installations in public places, immersive multiple-channel video and mixed-media installations.  For two decades, Attie has made art that allows us to reflect on the relationship between place, memory and identity. In many of his projects, he engages local communities in finding new ways of representing their history, memory, and potential futures, and explores how contemporary media may be used to re-imagine new relationships between space, time, place and identity.  For his project in Bethlehem, Attie is filming members of the community in four or five specific locations around the city, hoping to distill "some of [the] curious intersections of different layers [from] Bethlehem's past and present."

Among his many accomplishments, Attie has developed works of public art in Berlin, Tel Aviv, Rome, New York, Boston and San Francisco. His work also has been featured in numerous exhibitions including at The Museum of Modern Art in New York City, Centre Georges Pompidou in Paris, the Art Institute of Chicago and The National Gallery of Art in Washington, D.C. He is a recipient of the Rome Prize and Guggenheim Fellowship, and holds the Lee Krasner Lifetime Achievement Award in Art.

Attie will be the Horger Artist-in-Residence with the Department of Art, Architecture, and Design through Fall 2022, engaging students in the development of his new work. In addition, Attie will teach a seminar course encompassing public art, community engaged practices, site specific installation, performance and a range of topics related to social practice.

About the Horger Artist-in-Residence

Established in 2016, The Theodore U. Horger ’61 Endowed Artist-in-Residence for the Performing and Visual Arts was created through an estate gift from the late Horger in order to bring visiting artists to the university. A visiting artist is in residence rotating each year among the departments of Music, Theatre and Art, Architecture, and Design.  Attie is the sixth artist-in-residence in the program and AAD's second. In 2018, Karyn Olivier, professor of sculpture at the Tyler School of Art and Architecture at Temple University, was the department's inaugural Horger Artist-in-Residence.