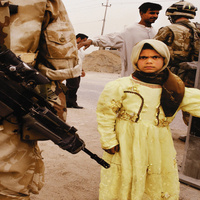 Nelson Mandela emerges from the shadows after twenty-seven years in captivity; the Berlin Wall crumbles; Kurdish refugees flee from Iraq to southern Tukey – these are the scenes of the human condition. If it happened in the last thirty years, photojournalist Peter Turnley was there, camera in hand. Traveling to over ninety countries, Peter Turnley (American, b. 1955) has made a career documenting the human condition.

His work has appeared in the pages of Harper’s, LIFE, National Geographic, The London Sunday Times, Le Monde, New Yorker, DoubleTake, and on the cover of Newsweek over forty-three times. Turnley’s photographs often draw attention to the struggles of marginalized and oppressed populations, including the ongoing refugee crisis. At the same time, he uses his lens to uplift moments of beauty, justice, and inspiration. His noteworthy subjects have included Indira Gandhi, Barack Obama, Fidel Castro, Ronald and Nancy Reagan, Nelson Mandela, Princess Diana, Pope John Paul II and many more. This exhibition showcases Turnley’s unwavering dedication to documenting the human experience, in all of its forms, around the world.

Exhibition hours are Monday through Friday 9 AM – 10 PM.