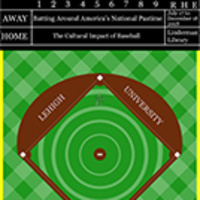 This exhibition examines how baseball, the first uniquely American sport, assumed a significant place in America’s national identity. The origins of the game are murky, with roots in British sports like cricket and rounders. During the 1850s to 1870s, baseball became professionalized with paid players, formal rules, and more stable ball clubs organized into leagues. Around this time baseball also became a part of intercollegiate sports, with Lehigh’s team beginning play in 1885.