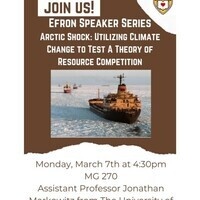 Why do some states project military force to seek control of resources, while others do not? Conventional wisdom asserts that resource-scarce states should have the strongest interest in securing control over resources. Counter-intuitively, I argue that, under existing conditions, the opposite is true. It is not resource-scarce states that will be more interested in militarily seeking additional resources, but rather states that are resource-abundant and dependent on income from extracting those resources. I test this proposition by leveraging a natural experiment that analyzes how states reacted to an exogenous shock that exposed resources in the Arctic in 2007. I employ original data that measures the change in states’ Arctic military presence before and after the shock. I find that dependence, not scarcity, explains how states responded to the shock. The findings enhance our understanding of the causes of resource competition and the geopolitical implications of climate change.