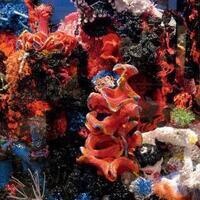 Crochet Coral Reef: By Margaret and Christine Wertheim and The Institute For Figuring | Art Galleries

Born on the coffee table of Australian twin sisters Christine and Margaret Wertheim, the Crochet Coral Reef has grown to become one of the largest community art projects in the world.  A unique nexus of art, science, geometry and environmental activism, the Reef is an ever-evolving archipelago of woolen installations emulating the naturally occurring hyperbolic structures of coral reefs through the process of crochet. The project has engaged a worldwide community of makers, spawning satellite reefs in Chicago, New York, London, Melbourne, Abu Dhabi, Capetown, and other locations.  Visitors to the exhibition will have the opportunity to experiment with hands-on hyperbolic construction, and to contribute to the Lehigh University Satellite Reef.

About the Crochet Coral Reef

The Crochet Coral Reef project resides at the intersection of mathematics, marine biology, handicraft, and community art practice. Through a process of collective creativity, the project responds to the environmental crisis of global warming and the escalating problem of oceanic plastic trash by highlighting not only the damage humans do to the earth’s ecology, but also our power for positive action. The Crochet Coral Reef collection has been exhibited in art and science museums worldwide, including the Andy Warhol Museum (Pittsburgh), the Hayward Gallery (London), the Science Gallery (Dublin), and the Smithsonian's National Museum of Natural History (Washington, DC). The project's Satellite Reef program has engaged thousands of people from all walks of life in more than a dozen countries. The Crochet Coral Reef is one of the largest participatory science + art projects in the world.

About The Institute For Figuring

The Institute For Figuring is a non-profit, Los Angeles-based organization dedicated to the poetic and aesthetic dimensions of science and mathematics. Co-founded by science writer Margaret Wertheim and her sister Christine Wertheim, a member of the Critical Studies faculty at California Institute of the Arts, the IFF specializes in creating participatory projects in which communities build large-scale artworks inspired by discoveries and techniques stemming from scientific and mathematical research.