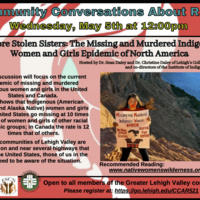 While this epidemic is mainly connected to people and communities in the Western states of the US and the provinces of Canada, those of us who live in the Eastern states of the US need to be aware of this epidemic because many of these missing women and girls are forced into the national and international sex trafficking industry. As the communities of Lehigh Valley are situated on and near several highways that cross the United States, those of us in the area need to be aware of the situation.

This discussion will be hosted by Dr. Sean Daley and Dr. Christine Daley of Lehigh’s College of Health and co-directors of the Institute of Indigenous Studies.