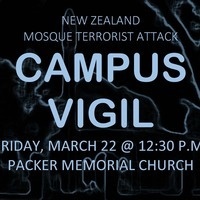 The terrorist attacks on mosque worshippers in Christchurch, New Zealand last week have shocked and outraged people of good will all around the world. The 50 Muslim men, women and children who died tragically and senselessly in a vicious act of violence--apparently at the hands of a white supremacist and political extremist--remind us that hatred is a powerful and lethal force that can show that our interconnected world is also a  world of great fragility and vulnerability.

Senseless violence affects us all, and we reaffirm in this moment that our obligations to care for one another, to live peacefully and to treat each other with respect are never abridged by distances or geographic boundaries. We deplore Friday’s terrorist attack on Muslims in New Zealand and condemn all hate crimes directed at people because of their religious commitments. The right to worship freely, without interference--and certainly without threat of violence--is enshrined in our fundamental political beliefs as Americans, and the Lehigh University campus joins in the chorus of voices around the globe who are condemning these murderous anti-Islamic acts, while expressing sympathies for those who lost loved ones in New Zealand.

In solidarity with those suffering loss in New Zealand due to these horrendous events, the University Chaplain’s Office will sponsor a Campus Vigil on Friday, March 22 at 12:30 p.m. in Packer Memorial Church. The Vigil will be followed by the regular Friday Muslim service, which will open with a meditation from Dr. Walead Mosaad, Director of Muslim Student Life. The entire campus community is invited to the Vigil being held in remembrance of those killed in New Zealand, and in support of the victim survivors who suffer profound bereavement due to these tragic events.