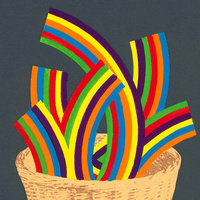 Hollywood movies, comic books, and pop music provided a flood of imagery to artists on both sides of the Atlantic hungry for pictures in a post-Abstract Expressionist world.  Pop Art began in Britain as artists of the 1950s turned a cool eye toward the excesses and mania of American consumer culture and celebrity. British Artists viewed the American Dream from an ocean away, and in light of their own postwar realities.  While responses to American pop culture remained central, British Pop artists like Eduardo Paolozzi, Patrick Hughes, and Patrick Caulfield infused their work with a sense of parody and ironic distance.